Photographing the Northern Lights – An Amazing Week in Yellowknife

Photographing the Northern Lights – An Amazing Week in Yellowknife

On March 17th 2015, a pair of coronal mass ejections (CMEs) that left the sun on March 15th hit Earth’s atmosphere and geomagnetic field, and sparked a geomagnetic storm. At first, it was a relatively mild G1-class (Kp=5) storm but intensified to a G4-class (Kp=8) storm, ranking it as the strongest geomagnetic storm of the current solar cycle. Geomagnetic storms are ranked G1-5. The storm pushed the northern lights South of the Canadian border. For 3 days/nights the Kp index was between 4 and 8, when on an average week, the Kp index is between 2 and 4.

For 8 consecutive nights, the northern lights put on breathtaking shows. The cold nights and challenges of photographing at -30 degree Celsius were well worth it!

The auroras were fast moving and displayed a wide range of colors rarely seen such as deep red and orange, and beautiful pastel colors. Of course, the more commonly seen colors green and purple were present. Pictures are better than words – enjoy! 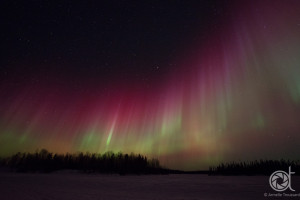 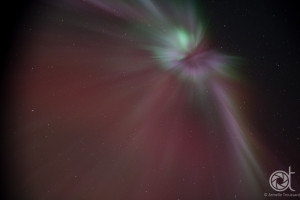 There are no comments